The Museu da Cerâmica (Museum of Ceramics), in Caldas da Rainha, was created in 1983, fulfilling the wishes of the city’s population. 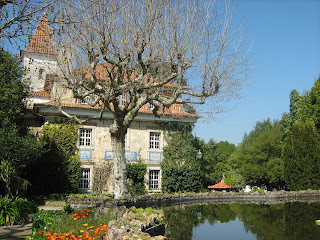 The building consists of a late-romantic palace which houses the permanent exhibition, and a secondary building where the Temporary Exhibition Room, a Shop, a Pottery Studio, and the Documentation Centre are located.

It is surrounded by gardens with alleys, flower beds, flower vases, ponds and an outdoor auditorium enhancing the profuse decoration which adorns the entire set, including tiles from the 16th to the 20th century, as well as architectural ceramics and statuary.

The museum includes several collections which represent the ceramic production of Caldas da Rainha and other ceramic centers in the country and abroad.
The collections include pieces of ancient pottery from Caldas that date to the 17th and 18th centuries and centers of production of the 19th and first half of the 20th century. The work of the potter Maria dos Cacos, author of utilitarian anthropomorphic pieces, and of the ceramist Manuel Mafra, are noteworthy.

Rafael Bordalo Pinheiro’s pieces deserve special attention, as they are one of the most representative assemblies of the great master in Caldas ceramics, which documents the intense work of the Fábrica de Faianças das Caldas da Rainha, between 1884 and 1905.

Also presented is earthenware from the Real Fábrica do Rato, traditional pottery, local sculpture, and miniature productions from the 19th and 20th centuries.

A group of contemporary ceramics by author, which include, among other works, pieces made by Llorens Artigas, Júlio Pomar and Manuel Cargaleiro stand out.

The Museum also holds a collection of tiles of Portuguese, Hispano-Moorish, and Dutch production from the 16th till the 20th century, comprising about 1200 tiles and 40 tile panels.

It also presents a collection of contemporary pieces, which illustrate the design and production of ceramic and glass from the 20th century, which are part of a donation made to the Museum in 2007, consisting of 1205 pieces.
Publicada por Museu da Cerâmica, Caldas da Rainha à(s) 11:43
Enviar a mensagem por emailDê a sua opinião!Partilhar no TwitterPartilhar no FacebookPartilhar no Pinterest
Página inicial
Subscrever: Mensagens (Atom)
Pt

The Museu da Cerâmica (Museum of Ceramics), installed in the Quinta Visconde de Sacavém, is located in the historical part of Caldas da Rainha near the old factory of Bordalo Pinheiro.

Bought by the State in 1981, and officially created in 1983, the Museum is headed by the Direção Regional de Cultura do Centro.

How to get here:

Easy walking route from the centre of the city

Family Ticket - From 4 elements with ancestry and descent in a straight line, or equivalent, legally proven) - 50%

Combination ticket - Ceramic and José Malhoa (in the park) Museums - €4,50

Sunday and and holidays until 2 pm *

Professional Journalists and Tourism (duly accredited and in performance of their duties);

Teachers and students when integrated in study visits (with documentary evidence);

Members of other Associations of Friends of Museums
* Every citizens residing in national territory.